» LFR » Technical articles » Why do elite runners lift their feet so high ?

Why do elite runners lift their feet so high ? 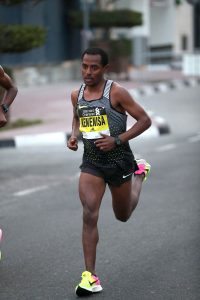 We have all noticed how elite runners tend to lift their foot high towards the buttock: Bekele is a perfect example (see photo).

You would think that through hard training they developed very powerful hamstrings to be able to do this. But this is not the case: the hamstrings play a very important role in the running technique but not this one.

The lift of the foot is above all and mainly the consequence of a passive movement of the runner which is linked to five factors:

In view of these five factors, strengthening your hamstrings to lift the foot higher is not very interesting: it is much more interesting to work on body movements, stretch and run with light shoes. .

There are often significant differences between runners in foot lift at equal speed. This is a very interesting indicator for determining the strengths and weaknesses of their stride and advising them on the most suitable running gait and also the best arm position.

In other articles, we’ll talk about whether or not to lift the foot high towards the buttock.

Now is the time to practice your technique!

» LFR » Technical articles » Why do elite runners lift their feet so high ?